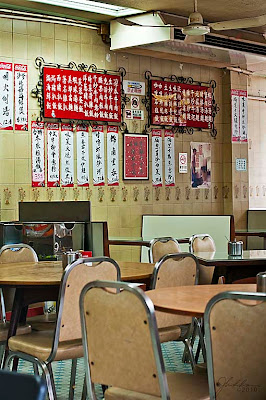 We headed to Yau Ma Tei district for breakfast to try Mido Café's Pineapple Bun, which they make themselves.  Being inside Mido Café gave me a provincial feel;  it was like stepping into a time capsule: square micro-tiled floor and pillars, retro furniture, uncushioned wooden booths with hard plastic lining.

The bun was crispy on top; soft and fluffy underneath.  Dunking it in yun yong milk tea was enough to make me want to order a dozen more buns.  Another breakfast treat in Mido is the French Toast.  It didn't taste like it was fried, and the sweetness of the syrup was just right - it didn't make the tiny hairs on my face stand up.

One of the highlights on the menu is the Fried Noodles with Sliced Pork.  Noodles are fried until golden brown and slices of pork, together with a savory sauce, are poured over the crispy noodles.  Imagine the variety of textures in one bite.
Their signature dish is the Spare Ribs Baked Rice.  It's fried rice with egg at the bottom, followed by sweet and sour pork spare ribs topped with homemade sauce using fresh milk as one of the main ingredients.  It is then oven-baked until a crispy crust forms on top.  The result?  Crispy spare ribs with creamy sauce on top, and savory rice at the bottom. 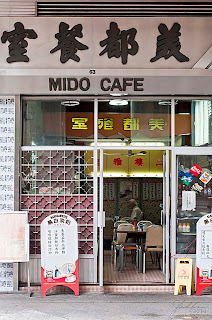 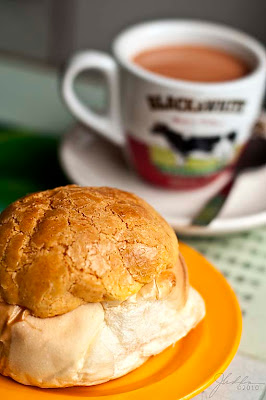 Pineapple Bun and Yun Yong Milk Tea - although it's called pineapple bun, you won't find any of it inside.  Sugary and crunchy on top with a soft, sweet dough underneath.  Milk tea is the perfect partner for this bread. 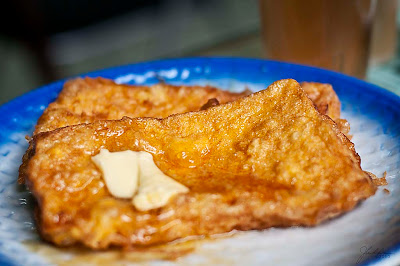 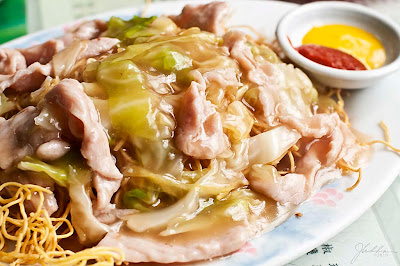 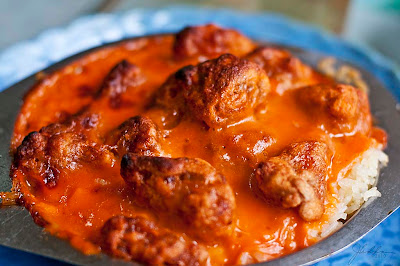 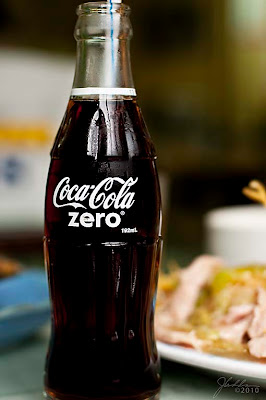 Coke Zero in a bottle - this completes the retro mood that the cafe exudes.

There are loads of Japanese restaurants in Hong Kong but only a few are really good.  Unfortunately, Watami isn't one of them.  Food is average at best, and probably the reason why the restaurant gets full during meal times is because of its affordability.  A hundred HK dollars can go a long way in Watami.  If you get a craving for Japanese food in Hong Kong, you know where not to go. 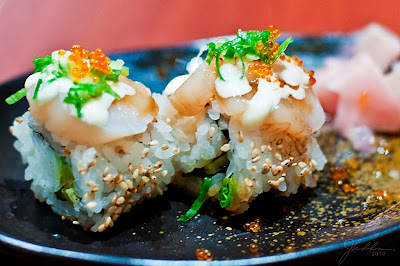 Grilled Scallops Sushi - most sushis in Hong Kong are too raw to my liking.  Don't get me wrong, I love sushi but if what's inside a roll is too raw I'd rather eat at McDonald's.  Anyway, the grilled scallops sushi was nothing great. 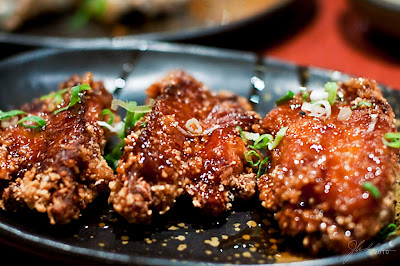 Crispy Chicken Wings - I liked this one, it was good.  It was tasty and the skin was actually crispy, not just the breading. 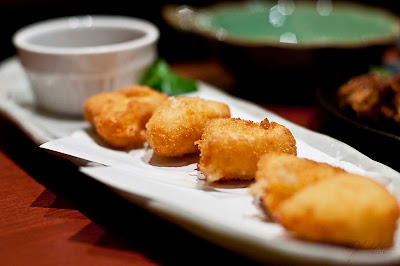 Deep-fried Camembert with Raspberry Sauce - I eat this cheese only when it's fried.  They surprisingly did it right; the cheese wasn't cooked to oblivion so it didn't burn my tongue when I bit into it. 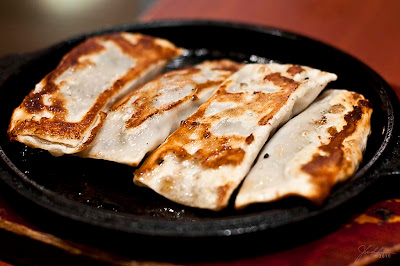 Gyoza on Hot Pan - and they call this gyoza.  There was hardly any meat inside.  It didn't say fried vegetable rice roll on the menu now, did it? 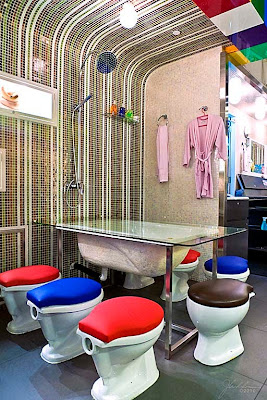 We were only on our second day and I was beginning to get tired from all the eating.  Already?  Perhaps walking and commuting from Wan Chai to Tsim Sha Tsui to Mong Kok and back, then Mong Kok once again can wear anyone out.  Unless you're from Hong Kong where everybody walks a mile a minute from point A to neverwhere.  Oh well, we made it back by 9 pm to where this concept restaurant is located.  It wasn't hard to find - Modern Toilet is right in front of Langham Place Mall.  From the escalator we could already see people queued up, waiting for their number to be called.  After 20 minutes of waiting (not bad, actually), we were ushered to our table.  Taking photos was an instinct.  I suppose this is true with anyone who has been to Modern Toilet.  I looked around and almost everyone was taking photos.  Do people come here to eat?  Seems to me that eating is secondary in this place.  Toilet bowls for seats, bathroom sinks for tables, giant toilet plungers protruding from the ceiling - very whimsical.  It was like being in a cartoon.  And the plates: well they weren't actually plates as we know them but mini ceramic toilet bowls, urinals, soap dishes.  Just about anything you can find in a toilet. 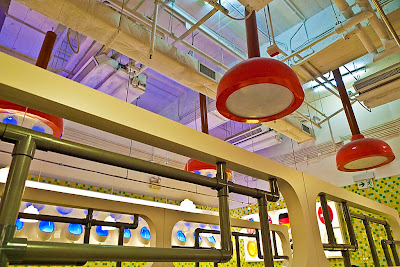 Looking at other people's food kept me from ordering.  I was actually enjoying the spectacle.  Besides, I still wasn't hungry enough and nothing on the menu seemed to jump start my appetite.  After what seemed like an eternity, we started ordering:  Dragon Eggs, Sweet Corn & Bacon Jacket Potato.  Japanese Milky Hot Pot.  Hmmm.  Until now, I still don't know what to make of it.  Different perhaps?  It wasn't bad but it wasn't that good either.  Bah, I am at a deadlock. 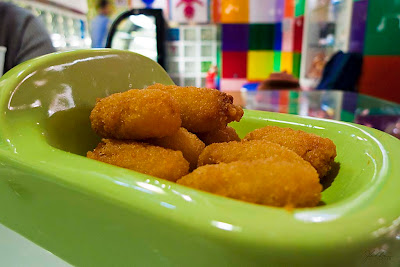 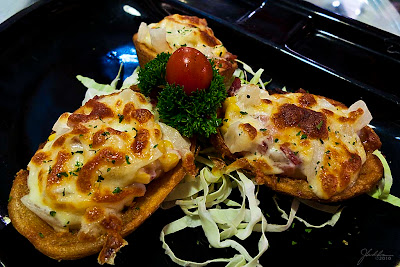 Sweet Corn & Bacon Jacket Potato - it was bland at first but when I got to the middle, it got better.  Generous amount of white onions inside, yum. 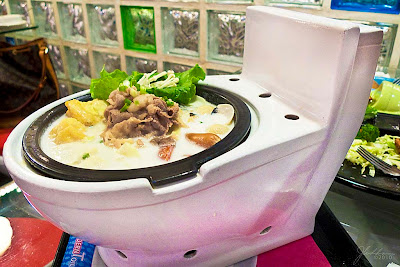 Japanese Milky Hot Pot - the star dish of the night but I still don't know what to make of it.  My mind is still accustomed to the salty taste of hot pot broth.  This one however, was sweet-ish so it put me off in a way.   But after a while, I got used to it so I guess it was all right in the end. 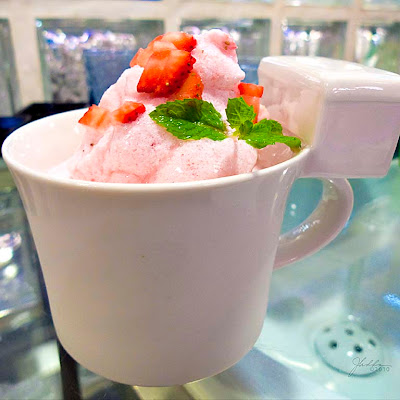 Strawberry Smoothie - this one was a hit.  What a way to cool off on a warm night.  They probably had too much milk anyway so instead of chucking it out the back door, why not use some on the hot pot, right?

Over all, the food is nothing much to rave about.  I would, however, recommend this restaurant for the novelty and experience of dining in unconventional style. 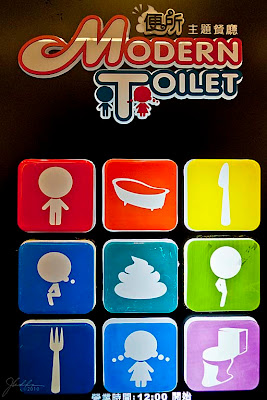 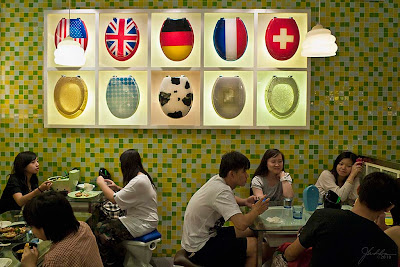 A mural of toilet seat covers. 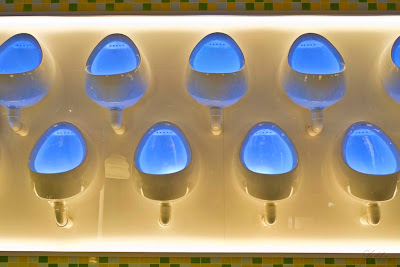