There is this humble little place in Mong Kok that serves dim sum so good it didn't go unnoticed by the guys that make those famous hotel and restaurant guides, and gave it a star.  It is the cheapest Michelin-starred dim sum restaurant in Hong Kong, if not the world (we only spent HK$89 for six types of dim sum).  I didn't know Mong Kok had something like this to offer so I had to go and  taste  see for myself. 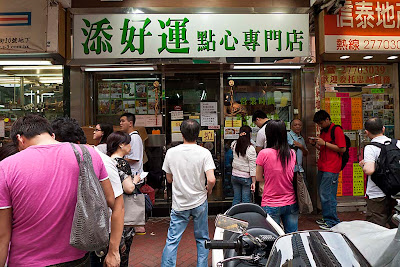 I had been warned about the long queue and longer waiting time so my friend and I got there at half past 2, thinking there would be less people eating.  We couldn't be more wrong.  There was no queue, just a mob of people waiting outside for a table.  How were we gonna do this?  The front-of-house manager was outside giving numbers and getting meal tickets.  We asked for a number and she said, "Come back one hour, fifteen minute."  Damn.  Good thing the ladies market was just two streets away, so we went and looked around -- before we knew it, an hour and fifteen had gone by.  We should be so lucky because when we got back, new customers were being told to come back in two hours.  Must've sucked to be them.
The place was so packed we had to walk sideways to get to our table which was at the very end right beside the tiny, steamy, hot kitchen.  Oh well, it was either leave or eat.  Guess what we did?  Yeah.
Five minutes later, our first order comes: Baked Barbeque Pork Buns.  Okay, as soon as I took a bite I understood.  The bun had a biscuity texture - soft, moist, flaky and a bit crispy all at the same time.  Then a burst of super tasty, sweet-ish pork filling.   How did it get that way, how?? 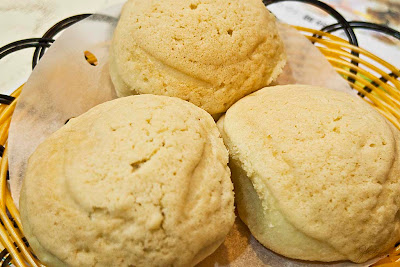 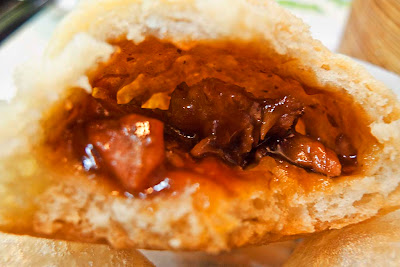 Baked Barbeque Pork Buns - try these and you'll understand why the restaurant has a coveted Michelin star.

Next item to arrive was  Steamed Tripe with Turnip.  Slices of juicy tripe marinated and steamed until super tender with nice wrinkly texture.  I could bite the meat in half with so much ease, that was how tender it was.  I had no idea where the turnip was, though. 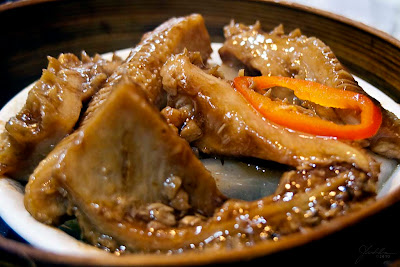 Steamed Tripe with Turnip - tripe marinated and cooked to tenderness.  I wonder how long it took for them to make it so tender.

We also got the Steamed Beef Balls with Bean Curd Skin.  I couldn't get enough of bean curd skin in Hong Kong, so I didn't hesitate when I saw this on the menu.  A mixture of ground beef, salted black beans and spring onions, these balls had a taste of ginger that cut through the strong flavor of the meat.  Delicious. 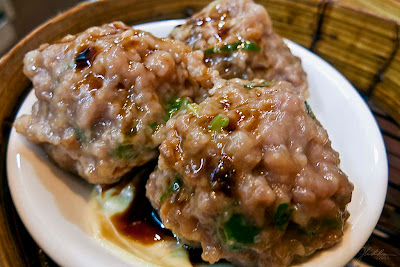 Steamed Beef Balls with Bean Curd Skin - moist beef balls with tons of flavor.  The bean curd skin was at the bottom of each ball.

I was so engrossed in photographing and eating that I didn't notice the waitress placed three more dishes on the table:  Steamed Dumpling Chiu Chow Style, Glutinous Rice with meat, and Fried Dumplings with meat.  Food enough for six persons, to be actually consumed by two.  Ack.  This was a classic case of having eyes bigger than our stomachs. 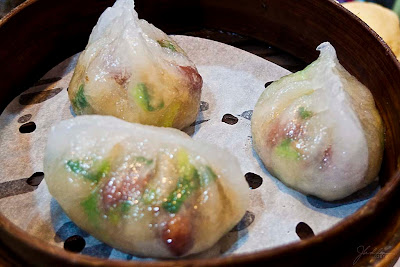 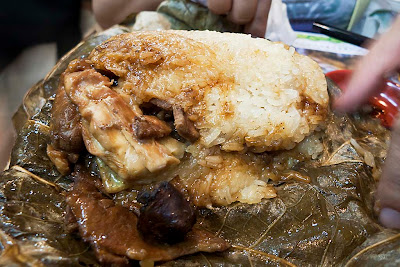 Glutinous Rice with Meat - Rice and assorted meat wrapped in lotus leaf.  It may not look pretty when unwrapped but once you taste it, it will blow you away.  Sticky, well-cooked rice  with a hint of sweetness to it.  The saltiness of the meat was the right combination for this treat. 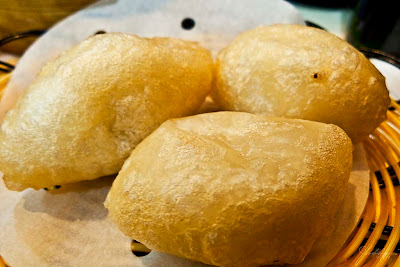 Fried Dumpling with Meat - Glutinous rice dumplings stuffed with meat then deep-fried.  These dumplings may be small in size but were heavy on the stomach.  I was seriously getting full by the time I took a bite of one of these, so I couldn't really say if it was good.  The dumpling was so heavy on the stomach I scooped out the meat inside to taste it.  Very good.  I'm sure I would enjoy these another time.


I don't think I would ever forget the taste of the baked buns.  You know it's really good food when you remember the taste.  Looking back, waiting for an hour and fifteen minutes didn't matter at all because the food was so good.  I'm glad I didn't let my impatience get the best of me.  If you find yourself in Hong Kong I truly hope that, along with your clothes and gadgets, you have brought a lot of patience to wait and brave the crowd for Tim Ho Wan's wonderful dim sum which will leave your stomach (and wallet) happy.  They didn't give it one star for nothing, you know.

Right after Tim Ho Wan, we went back to the hotel for a much needed rest.  Dinner won't be until 8:30 so I was dying to lie down on the bed, lift my feet against the wall and nap.  All that walking, however, gave me a good dose of endorphins which kept me awake lying in bed with my feet up. 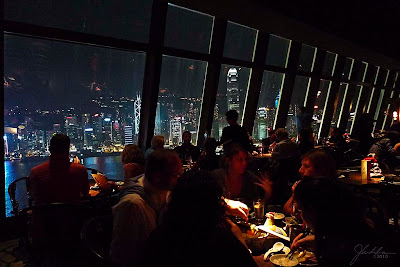 Aside from a great view of Hong Kong Island, I have been told that Hutong serves very good Beggar's Chicken, a staple fowl dish in Hong Kong.  A very elaborate dish, the chicken is "partially deboned, stuffed with pork, Chinese pickles, vegetables, mushrooms, ginger and other seasonings...wrapped in lotus leaves."  It is then coated with clay and baked for several hours.  Important note:  you have to order Beggar's Chicken in advance, at least 24 hours before your intended meal.  You won't get this in a few hours' notice, so do call ahead.  This cannot be emphasized enough.
The restaurant is dark, thus affording diners a spectacular view of Hong Kong Island at night.  The restaurant was packed; dinner reservations are a must.  It was a warm night so I opted for a Lychee Delight - smooth, sweet lychee shake.  Delightful indeed.
In addition to the chicken, we ordered Crystal Prawns with Crab Roe and Salty Egg Yolk, and the Egg White Fried Rice with Conpoy and Spring Onion.  Conpoy is dried scallop, made from the adductor muscle of scallops.  The waiter reminded us that Beggar's Chicken is served whole, implying that we might have ordered too much for ourselves.  We didn't care much about the big serving, we just really wanted to have it.  As for the prawns with crab roe and salty egg, I had the same dish in another restaurant two years ago and I wanted to eat it again.
The prawns came first.  Not much effort had gone into presentation but the taste - rich, creamy roe and salty egg batter coated the prawns, which were then fried.  I was bowled over, just like 2 years ago. 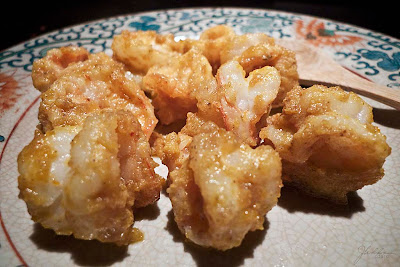 Crystal Prawns with Crab Roe and Salty Egg Yolk - it's not salty as you might think it should be.  The combination of mashed egg yolks and crab roe gave a creamy, powdery texture.

The main dish of the evening finally arrived.  The chicken was still encased in clay and the waiter gave a mallet to my friend for her to break it.   Strike it three times for luck, he said.  The first two hits were weak but the last one finally broke the mold.  They brought it back inside to take off the excess clay, then back to our table for carving.  The chicken was so tender you could literally carve it with chopsticks.  As for the taste, it had strong flavors and aroma due to the seasonings and lotus leaves. 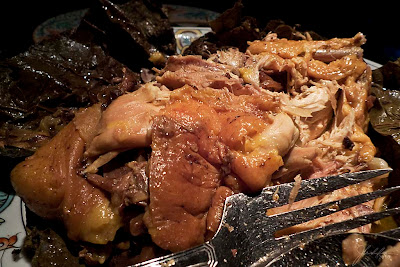 Beggar's Chicken - flavorful, fragrant chicken with meat so tender you could easily tear it off the bone with chopsticks. 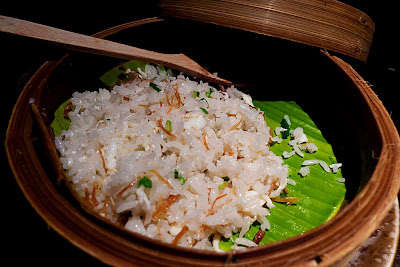 Egg White Fried Rice with Conpoy and Spring Onion - not to be outshined by the two dishes, the rice was very tasty.  Soft, yet offering something to the teeth.  It was the unifier of the table, bringing both prawn and chicken dishes into harmony.

Dining at Hutong will give you a bird's eye view of the ultra modern Hong Kong Island and the charm of old China as well - with cuisine to match.