Get Your Tapas On

Unlike France, the staff of life in Spain is not bread, it's finger food: TAPAS.  They are an integral part of the Spanish culture and lifestyle, served in cafés and bars throughout the country.  Tapas range from a simple snack of olives or fried almonds to delicious savory dishes which can be served as a light lunch or early evening snack.
In Madrid, it's difficult to qualify what is authentically local due to its melting-pot status for people and customs (and of course, food) all over Spain.  The popular Patatas Bravas are a very simple mixture of fried or roasted potatoes with a "Brava" sauce.  The sauce is slightly spicy, which comes as a surprise given a country-wide aversion for dishes with the slightest kick. 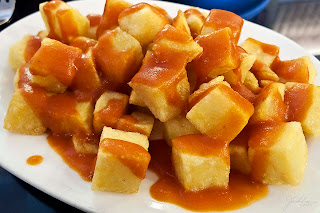 The calamares, flash-fried in olive oil, can be served alone or with alioli sauce, mayonnaise, or - yep, you're reading it correctly - in a sandwich (Bocadillo de Calamares).   A slice of lemon usually comes with your serving.  It's amazing how everybody in Spain manages to cook squid perfectly.  I never had a tough dish of calamares during my trips around the country. 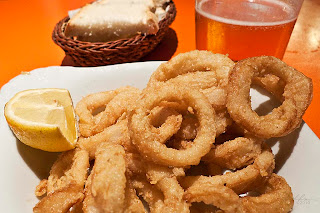 Moving on, let's head to the northern part of Spain, particularly the Basque Country (País Basco).  More than any other region in Spain, the Basque Country is known for its culinary originality.  The tapas, like the region itself, tend to be more expensive and inventive.  Here, they call their unbelievable bites pintxos, rather than tapas.  A typical pintxo is simply a skewer composed of a slice of bread, meat or fish, and a pitted olive.  Or they just stack the ingredients one on top of the other. 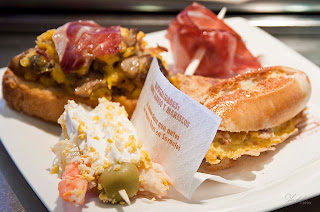 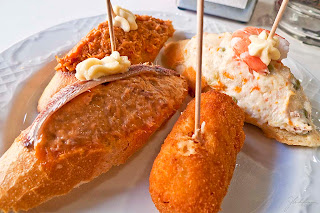 From the north, we rush down south to Andalusia, where it all started - allegedly.  The origin of where it all began is still the stuff of heated debates, therefore the allegation.  From what I've been told, in the south of Spain the local sherry was served in a glass with a lid, or tapa, of bread - sometimes topped with ham or cheese - apparently to keep the flies out.  In Spanish, the word "tapar" means to cover something up.
Anyway, back to tapas in Andalusia.  Known for the warmth of its climate (scorching hot, even) and its people, Andalusian bars tend to be very generous with their tapas.  Perhaps this is due to the fact that they aren't exactly celebrated for culinary inventiveness.  However, tapas here are traditional and among the best.  Pescado frito (fried fish) and albondigas (meatballs) are two common tapas in the region. 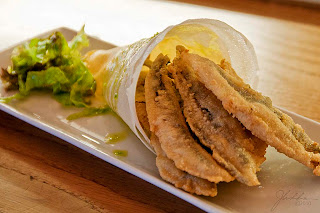 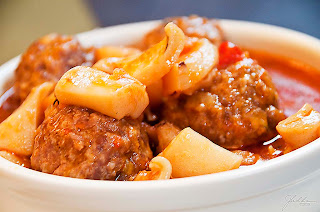 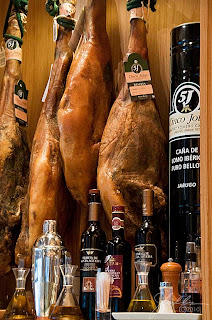 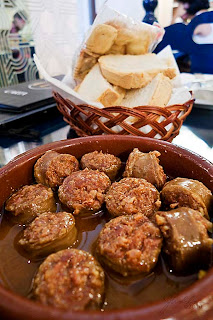 Of course, not to be skipped for tapas are the jamón and chorizo.  Hams hang ubiquitously over every bar, with little upturned paper umbrellas underneath to catch dissolving fat.  Chorizo varieties are endless, each having flavor as distinct as the regions where they come from.
Tapas are indeed Spain's greatest food invention.  "Eat when you drink, drink when you eat" is the philosophy.  So when in Spain, treat yourself to some or better yet - go for the long haul and do a tapas crawl.
Labels: Eat food food trip Spain tapas