Pin It
When I told my boyfriend I was going to Macau he asked me, "what could you possibly do there?"  Well I could try my luck playing at the casinos but since I don't gamble, the answer was simple:  "EAT."

This post is an account of my food adventure with a friend of mine in the tiny peninsula west of Hong Kong. 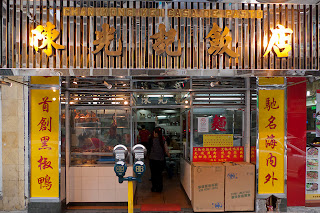 Situated in one of the side streets along the busy Almeida de Ribeiro, the restaurant could be easily overlooked.  Claimed to be the best roast meats eatery in town, Chan Kong Kei's specialty is the black pepper roast duck marinated in a special homemade sauce.  I thought the duck would be encrusted in crushed black pepper so I was expecting it to be spicy.  Wrong.  It was so damn good I wanted a whole bird all to myself.  It wasn't covered in pepper; in fact, I could only see a few peppercorns but could definitely taste it.  Moist, juicy duck meat and some parts of the skin were even crispy.  Don't forget to spoon the meat juices on top of your rice! 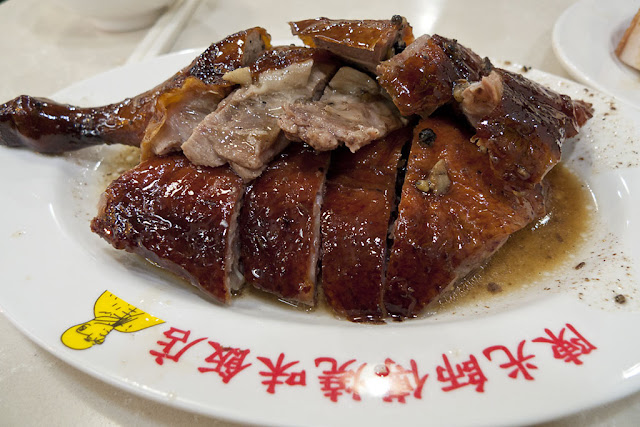 Of course we didn't have just one dish.  We would be crazy not to order that crispy pork hanging by the window.  As expected, it was heavenly.  Just look at that alternating layers of fat and meat, and the irresistible crispy skin on top. 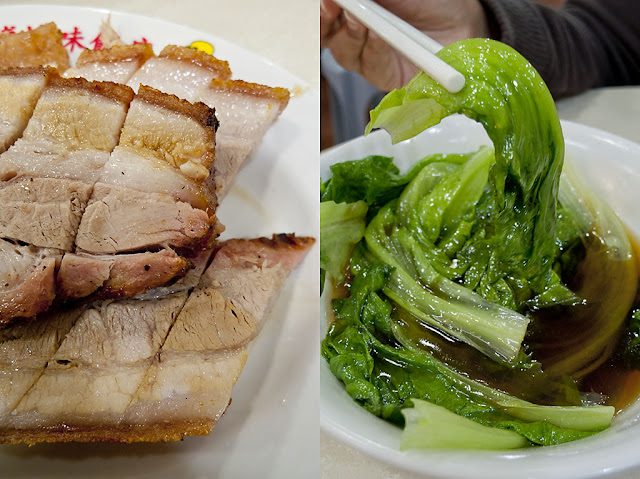 The braised lettuce was equally good, it still had a crunch although cooked in liquid.  Very tasty, and fresh vegetable dish. 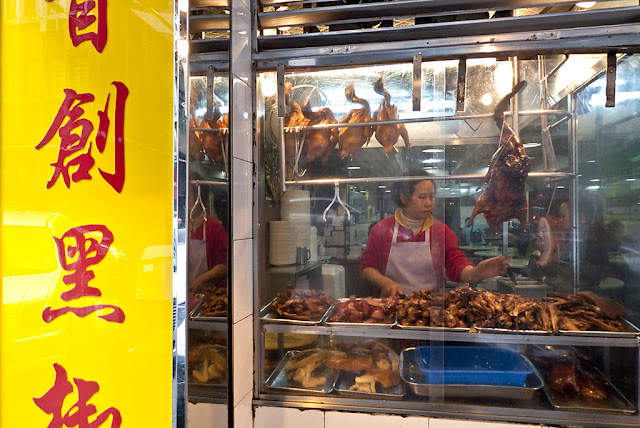 Right in front of Chan Kong Kei is a small alley that leads to a long line of customers who can't wait to sink their teeth into the best Portuguese egg tart in Macau: Margaret's.  No matter what time of day, don't expect the queue to shorten.  In fact, it just gets longer and longer so delay you mustn't when you get there. 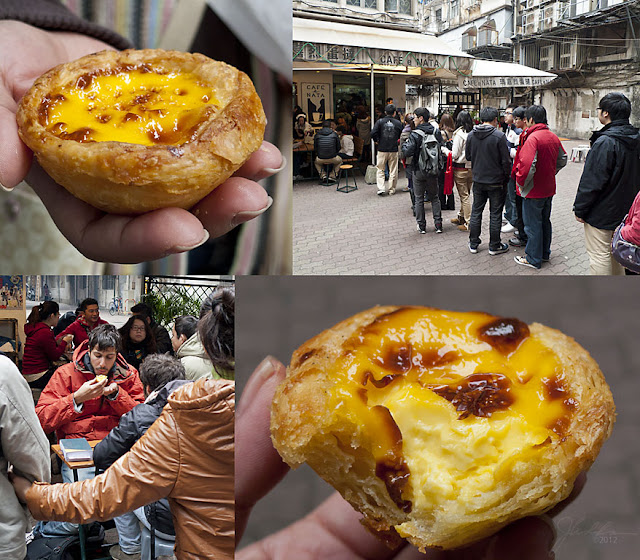 The tarts are always fresh off the oven so you get to enjoy this warm sweet eggy treat.  The crust is very flaky and crunchy; I loved it when the crust crumbled on to my shirt in every bite.  Better than Lord Stow's?

In the Senado Square vicinity, we came across Milk Top.  It's a dairy bar, serving ice cream and all sorts of milk products.  The puddings are packaged in tiny milk bottles that are too adorable to pass upon.  Alas, it didn't taste as good as it was packaged.  There was something lacking - sweetness, perhaps? 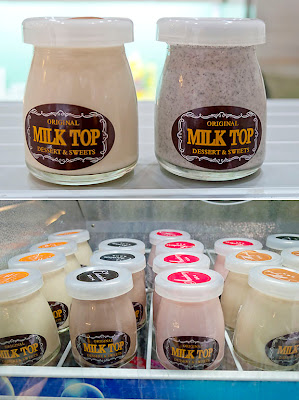 Just in front of Milk Top is the hip Danish Bar, serving Danish pastries.  We bought almost all varieties and I found the Black Sesame with Sweet Potato best.  I also liked the Chestnut cream balls.  Make sure to have the pastries heated, they taste so much better when warm. 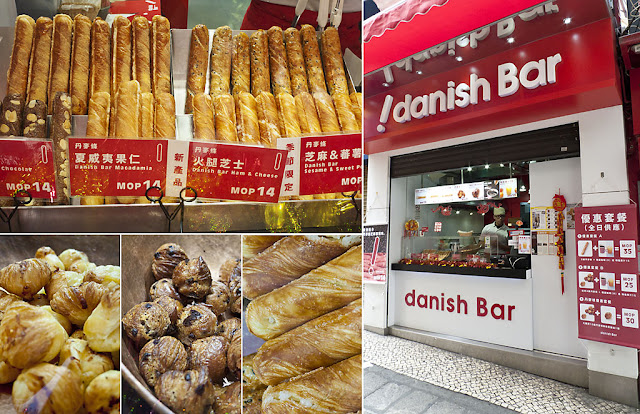 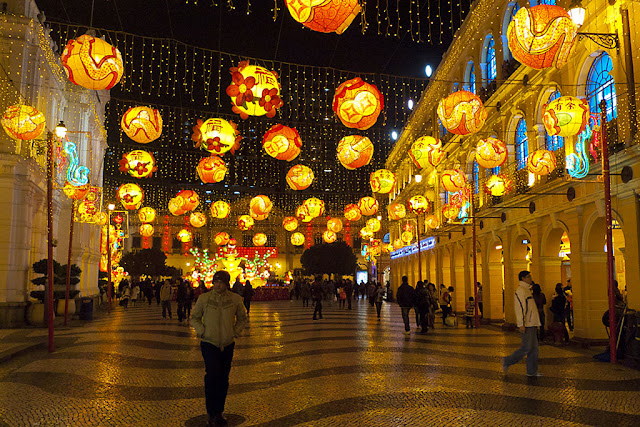 I love street food so I made it a mission for this trip.  These mobile food stalls usually start mushrooming around the square early evening.  I was hoping to find one that sold fried rice and dimsum but only saw one that sold fish balls, squid balls, hot dogs, bean curd, and other types of mystery meat.   Better than not eating any at all, I bought a bowl anyway.  I only picked those I could recognize, though. 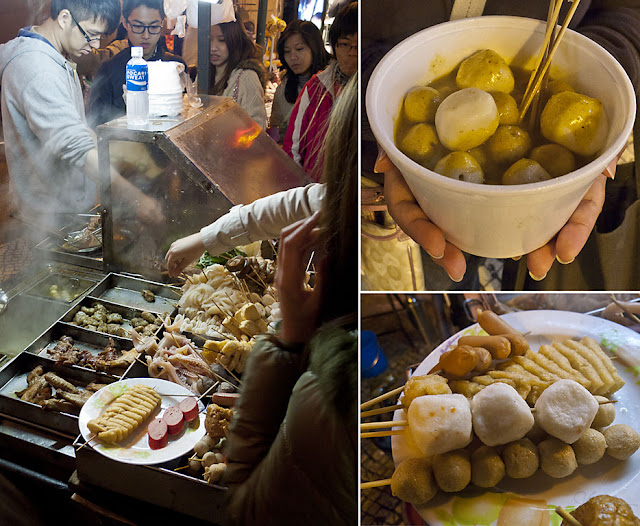 I took my pick, put them on the plate provided for, waited for my stash to be taken and submerged in boiling water.  After a minute or two, the food is tossed in a bowl then drenched in a spicy curry sauce.  Yum.

Food and pastry shops abound the streets around Senado Square right up to the ruins of St. Paul's church, and the area gets lively especially at night.  A popular snack in Macau is the pork chop bun but unfortunately, the one I had wasn't good at all.  The pork chop was so thin I felt like I was just eating a huge chunk of bread.  I should've scouted the area first before buying.  Lesson learned.

Their lava eggs, however, were so good.  The eggs are boiled just the way I like it, then served chilled (almost freezing) and marinated in some sort of soy sauce-sesame oil dressing.  I haven't tasted anything like it before - definitely a new gastronomic experience for me.  I really enjoyed eating it. 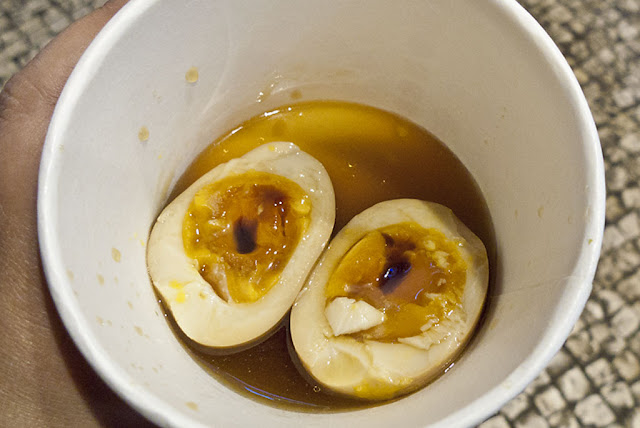 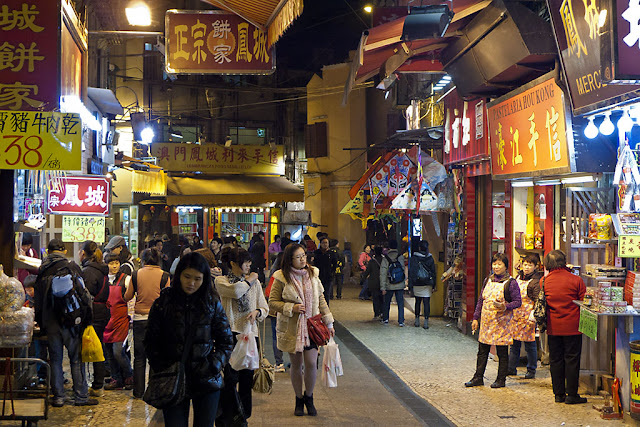 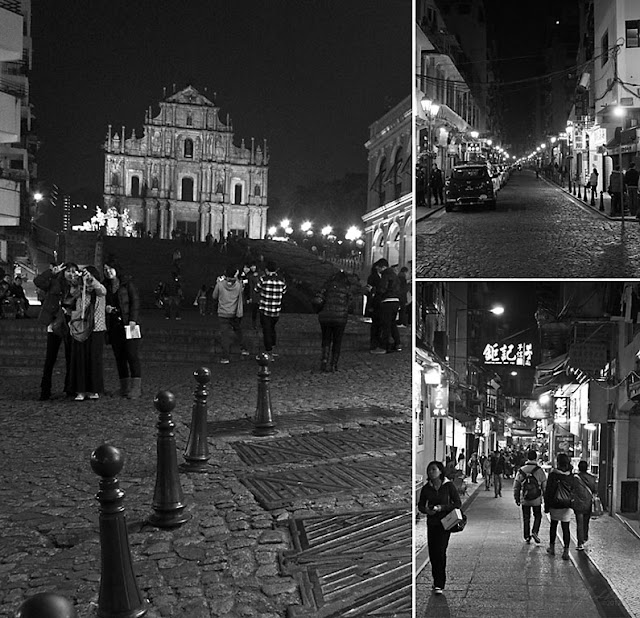 A Lorcha
289 Rua do Almirante Sérgio 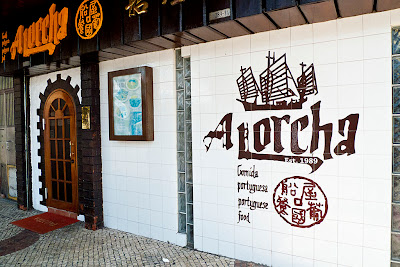 If there's one restaurant in Macau I would recommend without any hesitation, this would be it. Although it's not centrally located - it's on the southwestern tip of the peninsula, close to the A-Ma Temple - this restaurant will definitely not disappoint anyone.  Forget Fernando's.

From Senado Square, it's about a 2.3-km. walk (which was what we did).  It wasn't so bad since it was a cool day and we got to see a different side of Macau.  We even saw baskets of cod, salted and left to dry along the sidewalk.

By the time we got to A Lorcha we could hardly contain our appetites.  Thankfully, our server, Rico - a warm, friendly, and (of course) good looking Filipino - came to the rescue.  He recommended the best in their menu: Clam soup, Portuguese Fried Rice, Peri-peri Chicken.  He even gave us complimentary Bacalhau cakes.  Except for the refreshing Sangria, we were clueless on what to order so we eagerly approved Rico's suggestions.

The clam soup finally arrived and as a spoonful of broth touched my lips, I nearly fainted.  It was absolutely delicious. 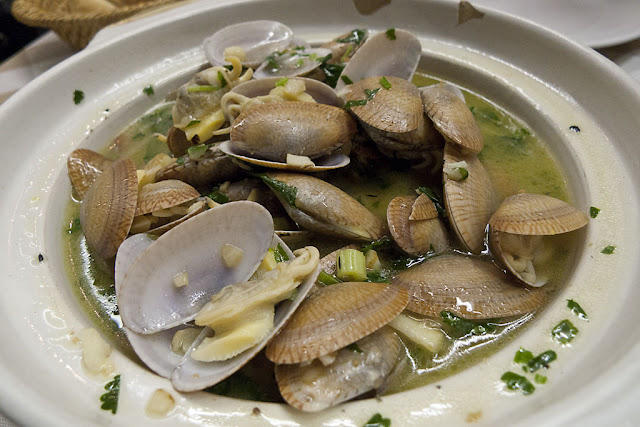 The dish may look simple but the flavor is complex: salty, garlicky, buttery, with bits of cilantro which I think adds yet another dimension to the soup.  It's even better when you dip bread in it.

The rice burst with different flavors and the sausage in it was good.  I nearly chipped a tooth, though, when I had a mouthful of rice - the olives weren't pitted!  Okay, forgivable, since I was in some sort of foodie euphoria from all that amazing food.  The chicken was moist and very tasty although it didn't do much for me.  It was, like, I've tasted it before but still it was very good. 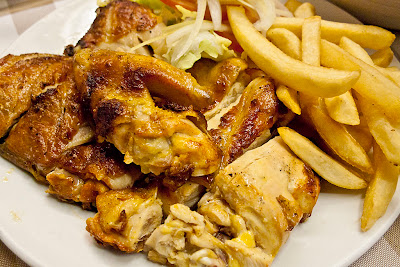 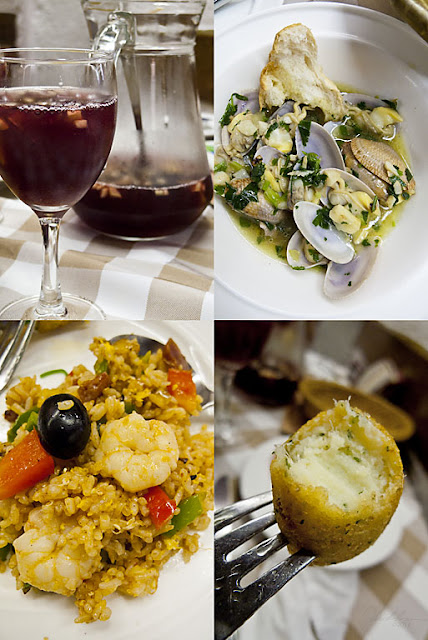 We took a bus back to the center not only because was it far, but also because we were so full we couldn't afford to walk a distance over 2 kilometers anymore.  Lazy asses.  Anyway, we were excited for our next stop, which was: When I searched the internet for places to eat in Macau, Leitaria I Son always showed up in the results.  Apparently, they are famous for their milk pudding which has received nothing but rave reviews.

Whenever we would pass this dairy shop along Ribeiro, it was always packed.  On our last day luck was on our side so we managed to get a table upstairs.  Their menu is in Chinese and the wait staff barely speak English so asking about the items on the menu would be useless.  Good thing there were photos of their milk pudding so we pointed at the one that had red beans on top, and one that had some sort of thin layer of curdled milk.  Our server then asked if we would like our pudding to be hot or cold.  Hmmm, I couldn't imagine how a hot milk pudding would taste like and since the temperature that day rose to about 20, cold pudding would be fine.  And boy, were we so happy we had the cold ones.  They were sublime. 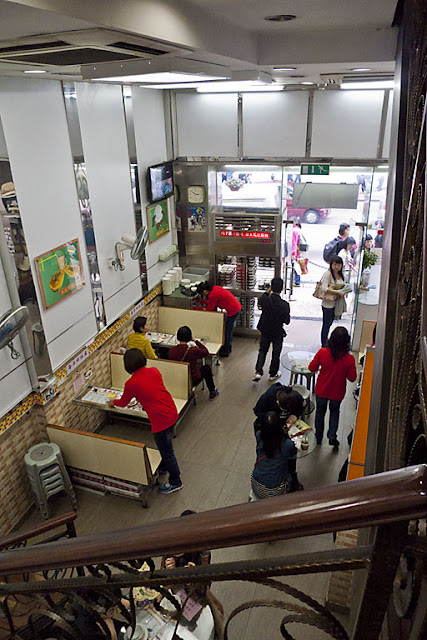 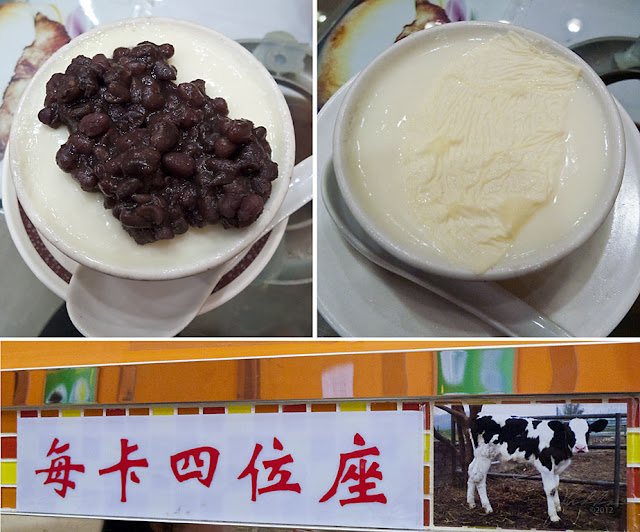 The pudding was sweet and had a superbly soft, silky, creamy texture.  The consistency was neither too firm like gelatine nor too soft like thick porridge.   Just a slight bite to it but still melted in my mouth with ease like thick cream.  The thin layer of curdled milk was a bit sweeter than the pudding itself - loved it.  What a perfect way to end our food adventure.


We couldn't help ourselves from taking a ferry to Hong Kong during our trip to Macau.  Since the boats dock at Sheung Wan, it was the perfect place to eat.  I was thinking of bringing my friend to this great dim sum restaurant I wrote about 2 years ago but the place was overflowing with people.  We didn't want to waste time queuing up so we took a turn at the first corner and saw this restaurant with a bright orange facade. 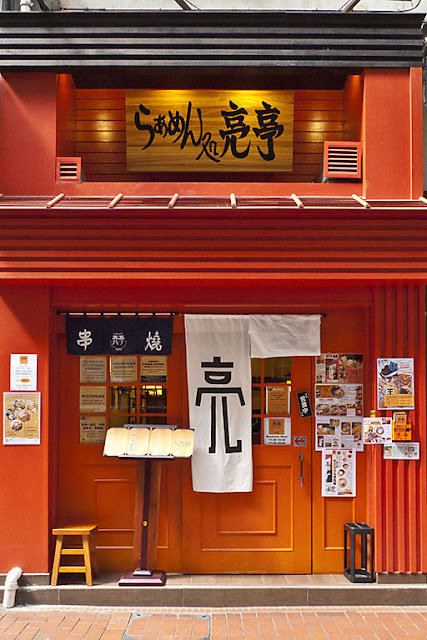 It's a ramen house.

I'm not a fan of ramen, you see, but I don't dislike it either.  Peering through the window to see what it was like inside - nice, clean interior and best of all, almost no one inside - we decided to eat there. 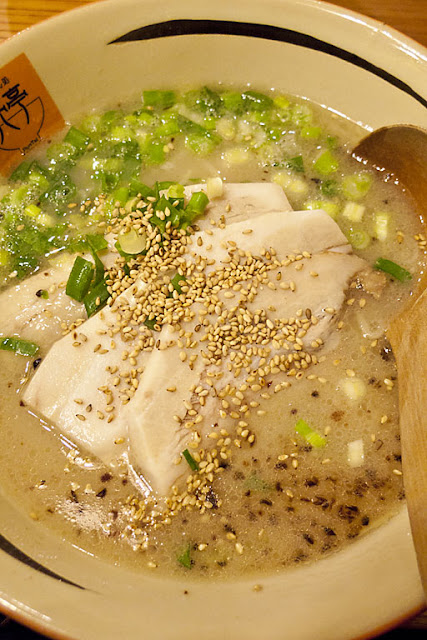 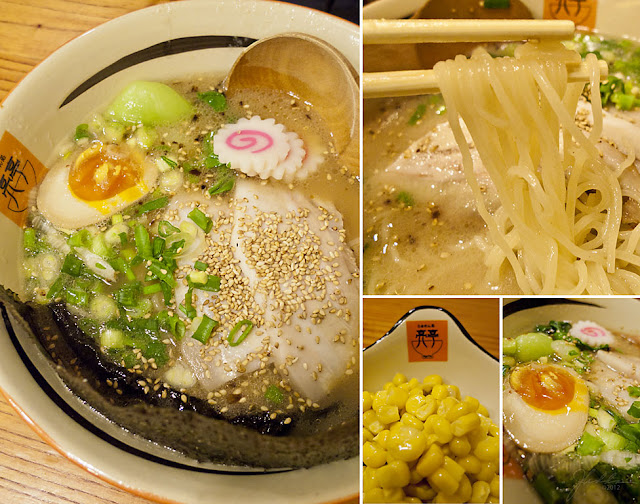 Eating in Sheung Wan is always a delight for me because I get to discover unique food spots such as this ramen shop.  From Chinese restaurants that cook live snakes right before your eyes, to some quaint French deli on the next block, or some Australian hot dog joint on the other side of the road, it's really a melting pot of eateries from around the world.
Labels: A Lorcha black pepper roast duck Chan Kong Kei clam soup Eat egg tart food trip Hong Kong Leitaria I Son Macau Margaret's Cafe e Nata milk pudding Portuguese food ramen Ryo Tei
Location: Macau